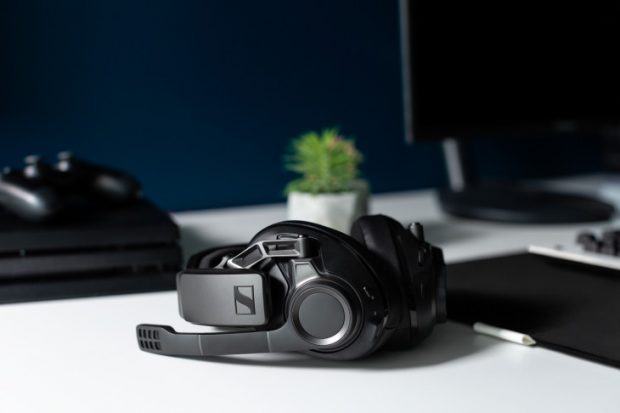 During Computex last week, Sennheiser gave media a sneak peek at its first wireless gaming headset, the GSP 670, slated to ship starting at the beginning of next month.

The GSP 670 retails for €349 (about $393), significantly pricier then other popular wireless gaming headsets (as well as its wired predecessor, the Sennheiser GSP 600, priced at $249.95). Sennheiser is hoping its features, as well as the company’s reputation for excellent sound quality and comfortable headsets, will convince gamers to take the plunge. (When I tried on a pair at Computex, it delivered on wearability, connection speeds and audio quality, but of course it is hard to tell how headsets will feel and sound after hours of gaming, versus a few minutes of testing).

Despite the freedom afforded by wireless, many gamers stick with wired headsets to avoid reductions in sound quality and connection speeds or having to worry about battery levels, issues that Sennheiser addresses with the GSP 670’s features. Like other wireless headsets, the GSP 670 needs to be connected to a wireless dongle.

The GSP 670’s microphone is noise-cancelling and can be muted by raising the boom arm. The headset has two volume wheels to allow users to control chat audio and game audio separately. Gamers can also adjust the audio on the GSP 670 with Sennheiser’s Gaming Suite for Windows, a software tool that lets users switch between audio presets or customize sound levels, and also includes surround sound modes and an equalizer.

In terms of battery, Sennheiser claims the GSP 670’s quick-charging battery can run for two hours after a seven minute charge. When fully charged, it says the battery can last for up to 20 hours on Bluetooth and 16 hours when connected via the GSA 70 dongle. The headset has automatic shutdown to save power.

The GSP 670 is currently available for pre-order on Sennheiser’s website and will ship beginning on July 1.