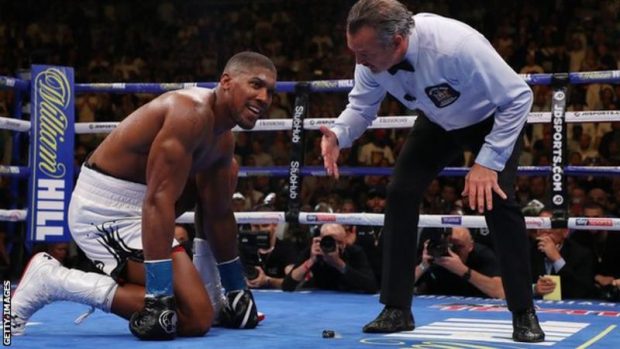 Andy Ruiz Jr produced one of the biggest shocks in the history of heavyweight boxing to rip Anthony Joshua’s IBF, WBO and WBA world heavyweight titles from him and tear up the division’s proposed plot lines.

“I got beaten by a good fighter,” said Joshua on Sky Sports. “It will be interesting to see how far he goes, but this is all part of the journey.

“He’s a champion for now, I shall return.”

This was no fluke, no punch from the ages, it was the breakdown of a fighter who looked shattered from an early stage.

It created an electric buzz amongst the 19,000 or so in the arena. Just what was happening? Were they going to see the unthinkable?

Ruiz, from appearance to pedigree, was an underdog in every sense of the word. When Britons wake up on Sunday morning, they will read of a truly iconic upset.

Rematch before the year is over

Joshua was down on two cards and up on one when the stoppage came but, according to promoter Eddie Hearn, he will get his chance to rectify things in a rematch in London, in November or December.

“This will devastate him,” said Hearn. “He will come back. It’s now down to the rematch and winning that fight.

“To get back to the heights he has been, he must win that rematch.”

For now, all talk of facing Tyson Fury or WBC champion Deontay Wilder can stop.

Lewis of course responded by winning a rematch. Ruiz though showed plenty here to suggest Joshua will have to find plenty to do the same.

When he did take shots after being floored, he took them and ploughed on gamely.

This bout changed his and his five children’s lives financially. The rematch will do so even more.

“This is what I have been dreaming about and I cannot believe I made my dreams come true,” he said.

“That was my first time getting dropped on the floor but it made me want it even more.”

He rightly said “the sky is the limit now”, while Joshua will look back on a US bow which was wrecked.