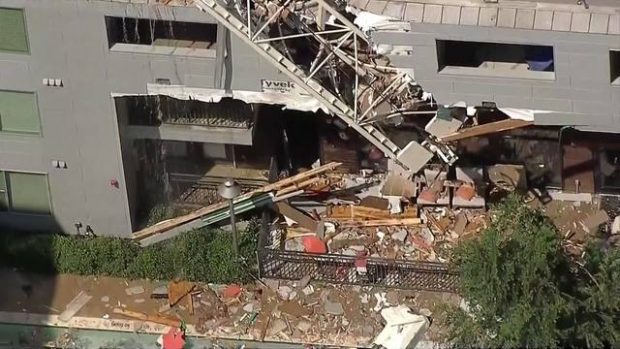 One person was killed after a crane collapsed onto a downtown Dallas apartment building Sunday afternoon amidst severe weather hitting the area. According to the National Weather Service, the Dallas-Fort Worth metropolitan area and surrounding cities are under a severe thunderstorm watch.

Dallas Forth Worth reported one person is dead after a crane collapsed onto the Elan City Lights building. Six people were taken to local hospitals: two of those people were critical, two were seriously injured and one suffered a minor injury and was quickly discharged.

“Multiple resources, to include Fire Operations, Emergency Medical Services, Urban Search and Rescue and Hazardous Materials assets, have been dispatched to the scene to help mitigate the situation,” Dallas Fire and Rescue said in a statement.

The DFW Scanner, a news blog dedicated to informing the North Texas and Dallas area of emergency and public safety alerts, posted a photo of the damage on its official Twitter page.

The crane collapse comes as strong weather and storms hit the Dallas metropolitan area. The National Weather Service said the region spanning Texas Hill Country and Dallas Forth Worth is experiencing severe thunderstorms capable of producing damaging winds, large hail and even tornadoes.

There has been a ground stop for incoming flights at Dallas-Fort Worth Airport due to weather. A video posted on Twitter showed debris flying in the air from a skyscraper under construction and crashing into a nearby building, breaking windows.