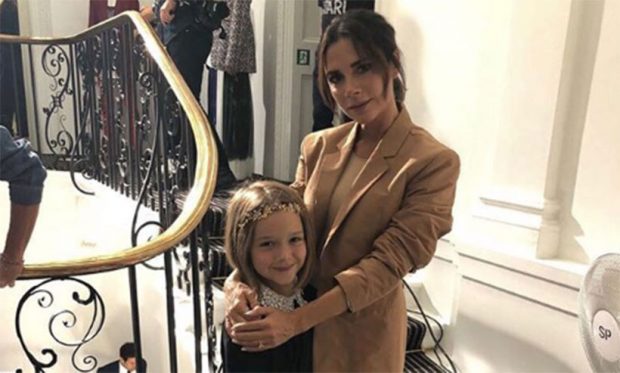 Victoria Beckham donated her daughter an expensive facial – and even cream for 1,350 euros.

Not only Victoria Beckham is a regular guest at the beautician. Her daughter Harper is also allowed to accompany her mom to her regular spa visits. Now the seven-year-old was even given her own beauty treatment by the fashion designer.

Victoria Beckham posted a photo of her daughter on Instagram, which shows her in the cosmetic treatment, a so-called baby facial.

“We have to use natural products for our children,” the fashion designer wrote. Which products were used in Harper’s treatment, the 44-year-old, however, did not reveal.

Whether the daughter of Victoria Beckham and David Beckham at their age has a Facial ever needed, is an open question. At least some fans think that Harper is too young for a cosmetic treatment.

Apparently, the fashion designer just wanted to spoil her offspring from head to toe. So Harper was on this occasion also immediately missed a new hairstyle by star barber Luke Hersheson. In one of her Instagram stories, Victoria Beckham shared a photo of her daughter, which shows a student with a “chic little French bob”.

Of course, Mrs. Beckham herself did not miss the opportunity to do something good for herself as well. She has stocked up on her visit to the beauty salon with new cosmetic products. Among other things, the British woman bought a moisturizer, the Daily Mail costs 1,000 pounds (about 1,355 euros) and was generated with Beckham’s own blood. According to the former “Spice Girl” Storm created own blood cream thanks to the body’s own cells have particularly regenerating and anti-inflammatory properties.