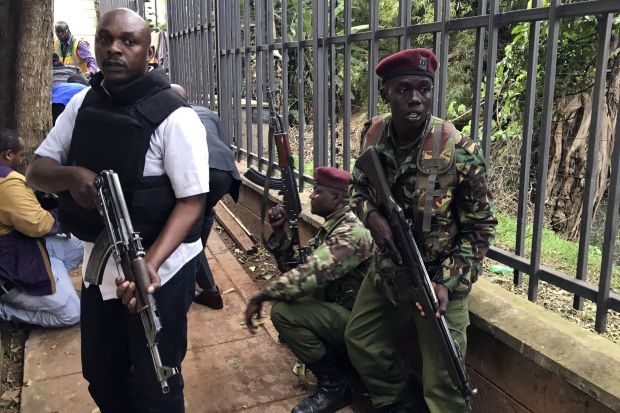 At least 21 people were killed when Somali militants stormed a luxury hotel compound in Nairobi, Kenya’s government has confirmed.

Hundreds were forced to flee the bloodshed at the DusitD2 hotel and business complex on Tuesday.

Some 28 injured people have been admitted to hospital, and Kenya’s Red Cross said 19 are still missing.

Somalia-based Islamist group al-Shabab said it was behind the attack, which triggered a 19-hour security operation.

Kenya has been a target for al-Shabab since October 2011, when it sent its army into Somalia to fight the jihadist group.

In a televised address, President Kenyatta said “every person that was involved in the funding, planning and execution of this heinous act” would be “relentlessly” pursued.

According to Reuters news agency, al-Shabab issued a statement calling the attack “a response” to US President Donald Trump’s decision to recognise Jerusalem as the capital of Israel.

Jerusalem is a sacred city in Islam, Judaism and Christianity – and while Israel regards the whole of Jerusalem as its indivisible capital, Palestinians claim the eastern part of the city as the capital of a future state.

Who are the victims?

US citizen Jason Spindler is among the dead. His brother, Jonathan, announced on Twitter that Jason had survived the 9/11 attacks in New York in 2001.

In an interview with US broadcaster NBC, Sarah Spindler said her son had been trying to “make a positive change in the third world in emerging markets”.

They oppose the Somali government, but have carried out attacks throughout East Africa.

During an 80-hour siege at the upscale centre, 67 people were killed.

Two years later, the group carried out its deadliest ever assault in Kenya, shooting dead almost 150 people at Garissa University.