Trump: Turkey Is “Economically Destroyed” In Attack On Kurds 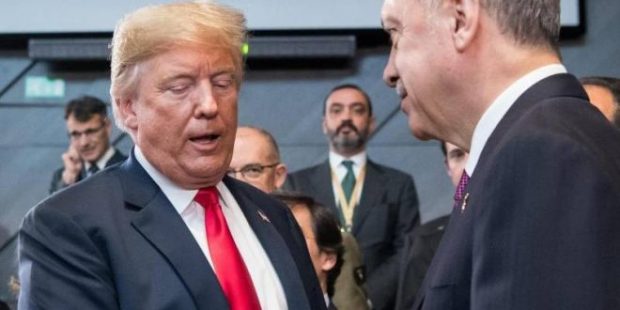 “At the same time, I do not want the Kurds to provoke Turkey,” emphasizes the US president. And cryptically speaks of a safety zone of 32 kilometers. And the Pentagon is to work on a military deployment plan for Iran.

US President Donald Trump has threatened Turkey in the event of an attack on Kurdish troops in northern Syria. Turkey will be “economically destroyed” if it attacks the Kurds, Trump wrote on Sunday evening (local time) on Twitter.

“At the same time, I do not want the Kurds to provoke Turkey,” he added in another message. Trump also spoke of the creation of a safety zone of 32 kilometers, but did not explain in detail.

Turkey has also responded to Trump’s threats on Twitter. The spokesman for President Recep Tayyip Erdogan wrote on Twitter in the short message service that there was “no difference” between the Kurdish People’s Defense Units (YPG) and the Jihadist militia IS. “We will continue to fight against them all,” announced Ibrahim Kalin.

The US-allied Kurds in northern Syria fear an attack by Turkey following the withdrawal of US troops from the country. Ankara sees the Kurdish fighters as terrorists and extended arm of the banned Kurdish workers’ party PKK in Turkey. President Erdogan had declared on Tuesday that he wanted to take action very soon “to neutralize these terrorist organizations on Syrian soil.”

In December, he had put an offensive against the Kurdish troops on hold for the time being, after the US had announced its withdrawal troops from Syria. On Thursday, Foreign Minister Mevlüt Cavusoglu said in an interview with NTV that Turkey would strike if the US delayed its withdrawal too long.

Even Trump’s withdrawal of US troops from Syria has caused great skepticism among foreign policy observers. However, the US Department of Defense is also very concerned about the recent request of the White House to draw up plans for a military operation against Iran. That should happen according to newspaper report in September.

The National Security Council of President Donald Trump has called on the Department of Defense to provide the White House with military options for an attack on Iran, the Wall Street Journal said Sunday, citing former and current government officials. The demand had caused great unrest in the Pentagon, it said in the report continues: “The people were shocked,” the newspaper quoted an anonymous source. “It was confusing – her shirt-sleeved way of talking about an attack on Iran.” At the request of the AFP, the Pentagon said it was part of the ministry’s normal task to draw up plans for the White House.

The attack plan was requested by the Wall Street Journal after three shells hit the heavily guarded government district of Baghdad, Iraq, on September 7. There is also the US Embassy housed. Washington blamed pro-Iranian militias for the attack and threatened Tehran that the US would “act swiftly and decisively” if US officials or US government buildings were damaged in an attack.

Trump’s National Security Advisor John Bolton is known for his tough stance on Iran. In 2015, he published a post in The New York Times titled “To stop Iran, you have to bomb Iran.”