Winter Weather: 1200 Soldiers Are On Alert In Austria 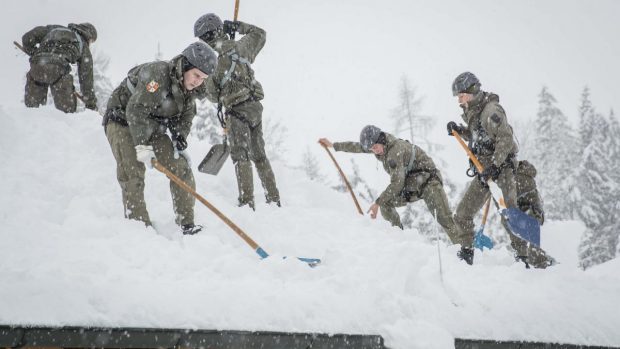 Snowfall calls for emergency services. Avalanche situation is getting worse.

Around 140 soldiers have been in the Assistance mission since Tuesday morning. They shovel roofs free, as in the room Hochkönig-Dienten, Salzburg, or clear roads, as in the municipality Hintersee in the area Flachgau. Also in St. Koloman in the district of Hallein almost 50 soldiers of the leadership support battalion 2 are busy freeing the roofs of kindergarten and elementary school from snow.

On Wednesday, the army could also move out at Hochkar, Lower Austria. In addition, alpine forces support the mountain rescuers in their search for two missing touring hikers in Hohenberg, Lower Austria. In the state of Salzburg, the avalanche rescue trains are still on call, in Tyrol there are also 100 soldiers. In Styria, there is no flying weather to carry out reconnaissance flights or avalanche reports. Nevertheless, numerous helicopters as well as 1200 soldiers are ready in the west of the country.

The situation is getting worse in many parts of the country. As a precaution, the highest avalanche warning level of the five-part scale was imposed in the Styrian Northern Alps on Tuesday evening. Until Friday you can expect up to one meter of fresh snow. As before, 2000 people are cut off from the outside world. Three communities had been declared disaster areas: Pölstal, Hohentauern and Pusterwald. Also in Lower Austria the highest danger level in the Ybbstaler Alps and in the Schneeberg-Rax-area cannot be excluded. Heavy snowfall was followed by a storm warning at noon on Tuesday. On the other hand, in the Tyrol this week probably avalanche warning 5 will not be called. The situation is under control, it is called by the national warning center. Overall, around 100 roads in Austria are closed due to avalanche danger.

For the time being, according to the Central Institute for Meteorology and Geodynamics (ZAMG) no end of the current weather situation in sight. By Thursday, 20 to 60 centimeters of fresh snow are expected on the northern side of the Alps, and more than a meter in the mountains. At times stronger winds were blowing in the mountains and partly stormy wind from west to northwest.

After a brief reassurance on Friday and Saturday, according to meteorologists, the next snow front will reach the northern side of the Alps on Sunday. While it continues to snow here, it remains largely dry on the southern side of the Alps in the next few days, only a few showers pull through and the sun will be out.

Areas to Find a Lady Online