Thousands Demonstrate In Budapest Against Orban 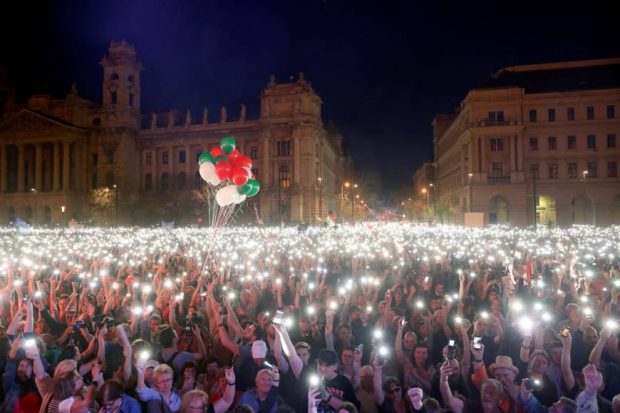 The wave of protests against the right-wing conservative government of Prime Minister Viktor Orban continues – beyond the borders of the capital.

Thousands of people continued their protests against the right-wing conservative government of Prime Minister Viktor Orban on Saturday in Budapest. When the snow fell, the crowd said slogans such as “We’re protesting against the slave law”, “General strike” and “Stop Orban” to the parliament building. Opposition parties, trade unions and NGOs also formulated an ultimatum to Orban.

The protest movement wants to pass on Tuesday a document with their demands to the Prime Minister. He then has five days to set up a negotiating delegation, said the head of the Iron Workers’ Union, Zoltan Laszlo, at the rally. If this does not happen, there will be a nationwide warning strike, said Laszlo. On January 19, demonstrations will take place throughout the country.

Now is the time of the words over, it would have to follow action, Laszlo called to resistance. “The armchair revolutionaries must finally get up and take the step in the right direction,” he emphasized. The union leader reiterated the call for an immediate withdrawal of the “slave law”, which provides for a massive expansion of the allowed overtime.

The protest movement had begun in December, when the parliament controlled by Orbán’s conservative Fidesz had passed a labor law allowing employers to order up to 400 hour overtime a year. What is defended by the government as a measure to combat the labor shortage in the country, unions and opposition as a “slave law”.

In addition to the ultimatum for Orban, representatives of parties and civil organizations emphasized the importance of the merger in the fight for democracy and freedom in Hungary.

According to activist Vera Juhasz, every human being is needed to “create a more just world” in Hungary. The pedagogue Katalin Törley criticized: Orban and his government would falsify not only the past, but also the future. The demonstration came to a peaceful conclusion with the singing of the national anthem.

However, the Internet portal “hvg.hu” reported that the government is trying to trivialize the demonstrations. So she claims that the participants of the rallies are “provocateurs” George Soros. The US-born billionaire has become the main enemy of Orban in recent years, placing Soros at the center of his anti-refugee campaigns. The fact that Orban accuses the Jewish Holocaust survivor of a “plan” for the settlement of millions of migrants in Europe evokes in critics associations with anti-Semitic conspiracy theories such as the “Protocols of the Elders of Zion”.