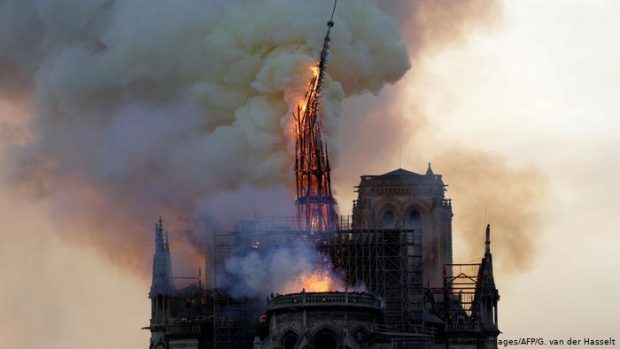 French President Emmanuel Macron has vowed to rebuild the medieval cathedral of Notre-Dame after a major fire partially destroyed the Paris landmark.

Firefighters managed to save the 850-year-old Gothic building’s main stone structure, including its two towers, but the spire and roof collapsed.

The fire was declared under control almost nine hours after it started.

The cause is not yet clear but officials say it could be linked to extensive renovation works under way.

Paris prosecutor’s office said it was currently being investigated as an accident. A firefighter was seriously injured while tackling the blaze.

Visiting the site on Monday night, Mr Macron said the “worst had been avoided” with the preservation of the cathedral’s main structure as he pledged to launch an international fundraising scheme for the reconstruction.

“We’ll rebuild this cathedral all together and it’s undoubtedly part of the French destiny and the project we’ll have for the coming years,” said Mr Macron.

The fire started at around 18:30 (16:30 GMT) on Monday and quickly reached the roof of the cathedral, destroying its stained-glass windows and the wooden interior before toppling the spire.

Firefighters then spent hours working to prevent one of the iconic bell towers from collapsing. Search teams are now assessing the extent of the damage.

Mr Macron said the cathedral was “for all French people”, including those who had never been there, and praised the “extreme courage” of the 500 firefighters involved in the operation.

because it’s what our history deserves,” he added, visibly emotional, calling it a “terrible tragedy”.

The French charity Fondation du Patrimoine is launching an international appeal for funds for the cathedral, a Unesco World Heritage site.

US President Donald Trump said it was “horrible to watch” the fire and suggested that “flying water tankers” could be used to extinguish the blaze.

In an apparent response, the French Civil Security service said that was not an option as it might result in the collapse of the entire building.

Because of the fire, Mr Macron cancelled a speech on TV in which he was due to address the street protests that have rocked France for months.