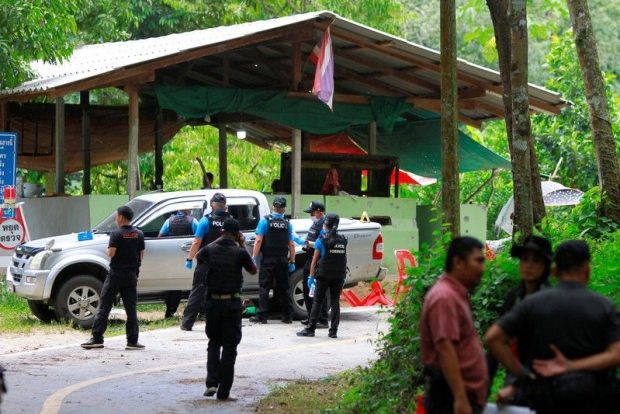 Suspected separatists have killed at least 15 people and injured four in southern Thailand, in one of the country’s worst attacks in years.

Police officers were among those killed at the attack on a security checkpoint in Yala province.

The attackers used explosives and then scattered nails on roads in an attempt to slow down people chasing after them.

Thousands have been killed in southern Thailand since a separatist insurgency gripped the region in 2004.

What happened in the attack?

The attack took place on Tuesday night – Yala is one of three provinces in the region that have often been hit by violence.

Separatist insurgents are believed to have targeted a security checkpoint, killing at least 15 people – including a police officer and numerous village defence volunteers.

These volunteers are usually civilians who have been trained to use weapons and are tasked with protecting the village.

There is still no evidence as to who was behind the attack, but Colonel Pramote Prom-in, a regional security spokesman, told Reuters that it was “likely the work of insurgents”.

The southern region used to be a sultanate known as Patani. Most people who lived in Patani were Malay Muslims. But at the beginning of the 20th Century, Patani became part of Thailand.

“[The Malay Muslims were] different from most people in the rest of Thailand, whether culturally, ethnically or religiously,” Rungrawee Chalermsripinyorat, an independent analyst based in Australia, told BBC News.

These Malay Muslims fought “against cultural assimilation, [but were met] with strong state suppression”, she said.

Technically, they’ve never stopped. But violence in southern Thailand had relatively calmed down – until 2004.

In that year, gunmen raided a military arms depot, killing the four guards and making off with about 400 assault rifles. Waves of attacks blamed on ethnic-Malay separatists would later follow.

“I think it is unlikely to signify a return to the full-fledged military battle [of] several years ago,” said Ms Chalermsripinyorat.

“It may just be a normal military operation to remind people of [the group’s] existence and military might.”

Why does all this matter?

More than 7,000 people in southern Thailand have died since the conflict between the insurgents and authorities resumed in 2004, said Deep South Watch, a group that monitors the violence.

“Secessionist conflicts elsewhere have shown that the longer a conflict is prolonged, the more complicated the situation becomes,” she said.

“It can then become a fertile ground for unwanted elements.”