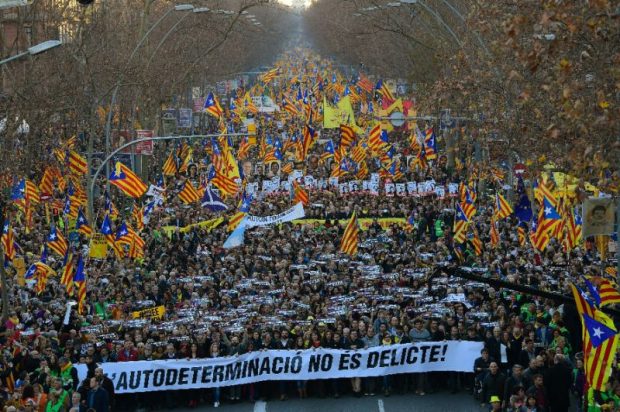 “Self-determination is not a crime”: In Barcelona, ​​the masses took to the streets to protest a lawsuit in which twelve leaders of the independence movement stand trial.

In protest against the trial of twelve Catalan independence leaders, 200,000 people took to the streets in Barcelona on Saturday, police said. “Self-determination is not a crime,” was the big banner. The protest was led by the Catalan regional president Quim Torra.

The organizers spoke of 500,000 participants. The demonstrators waved the flag of the Catalan independence movement and carried banners saying “freedom for political prisoners”.

Twelve leaders of the independence movement have been tried since Tuesday before the Supreme Court in Madrid, threatened with long prison sentences. Catalonia’s former vice-president, Oriol Junqueras, as well as eleven other leaders of independence, are accused of organizing an independence referendum classified as illegal by the Spanish judiciary in October 2017. The then regional president Carlos Puigdemont then declared the detachment of Catalonia from Spain.

The then conservative central government then placed the region under receivership and had several independence advocates imprisoned. The defendants, some of whom have been in custody for more than a year, vehemently reject all allegations.

The process is scheduled to run for three months and will be televised live. Hundreds of witnesses will be heard, including Spain’s conservative ex-Prime Minister Mariano Rajoy. A judgment is not expected before July.