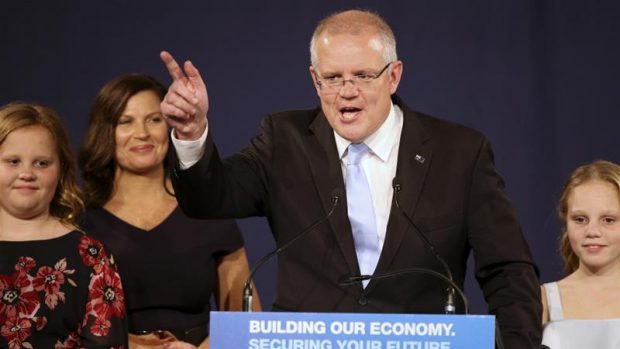 Australian Prime Minister Scott Morrison is close to securing a majority government as the election’s final results are being counted.

His conservative coalition has defied polls and is leading with 77 seats, the Australian Electoral Commission says. Only 76 are needed for a majority.

Exit polls had predicted a Labor Party win for the first time in six years.

Labor leader Bill Shorten resigned in the wake of his party’s surprise defeat, telling members: “It is obvious that Labor will not be able to form the next government.”

In his victory speech on Saturday night, Mr Morrison paid tribute to “the quiet Australians” who voted for the coalition.

“It’s been those Australians who have worked hard every day, they have their dreams, they have their aspirations, to get a job, to get an apprenticeship, to start a business, to meet someone amazing,” he said.

“To start a family, to buy a home, to work hard and provide the best you can for your kids. To save for your retirement. These are the quiet Australians who have won a great victory tonight!”

Why was the election important?

Australia holds elections every three years but, with infighting rife, no prime minister has succeeded in serving a full term since 2007.

Mr Morrison said he had united his government – a coalition between his Liberal Party and its traditional ally, the National Party – in the nine months since he replaced Malcolm Turnbull as prime minister.

There were fierce debates about the rolling leadership turmoil, formal recognition of indigenous Australians, and the treatment of female MPs in parliament.

“I think people have become afraid after a very negative campaign,” Labor supporter Julie Nelson told Reuters at the party’s Melbourne election night function. “They [the Liberals] managed to convince people they should be afraid of change.”