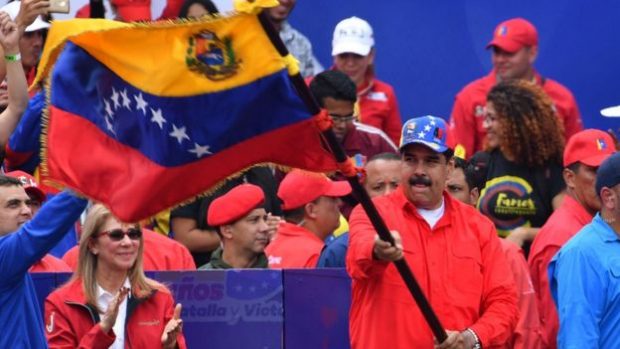 Thousands of protesters have taken to the streets of Venezuela’s capital Caracas in support of President Nicolás Maduro – and his self-proclaimed interim successor Juan Guaidó.

Mr Guaidó said the country’s opposition movement would “carry on in the streets”. Mr Maduro told supporters he was the only president of Venezuela.

Mr Guaidó declared himself president last month and is backed by the US and several Latin American countries.

Russia and China back President Maduro.

The stand-off began days after Mr Maduro was sworn in for a second term, following disputed elections which many opposition leaders did not contest because they were in jail or boycotting them.

Mr Guaidó, who is head of Venezuela’s National Assembly, says the constitution allows him to assume power temporarily when the president is deemed illegitimate.

Addressing thousands of supporters in the capital Caracas, Mr Guaidó said protests would continue until his supporters achieved “freedom”.

But a pro-Maduro crowd gathered to mark the 20th anniversary of the rise to power of his predecessor, the socialist leader Hugo Chávez. Mr Maduro accused international media of “making invisible” [not showing] demonstrations by pro-government supporters.

Why US sanctions on Venezuela will hurt

The rival protests come a day ahead of a deadline given to Mr Maduro by major European countries to announce new presidential elections – otherwise they would also recognise Mr Guaidó.

Military support is seen as crucial to Mr Maduro’s hold on power. Many supporters at Saturday’s rally were seen wearing the khaki uniforms of the government militia.

Where do other countries stand?

More than 20 countries, including the US, have recognised Mr Guaidó as Venezuela’s interim president.

Russia, China and Turkey are among those who have publicly backed President Maduro.

Last week, several European countries including Spain, Germany, France and the UK said they would also recognise Mr Guaidó as president if elections were not called within eight days.