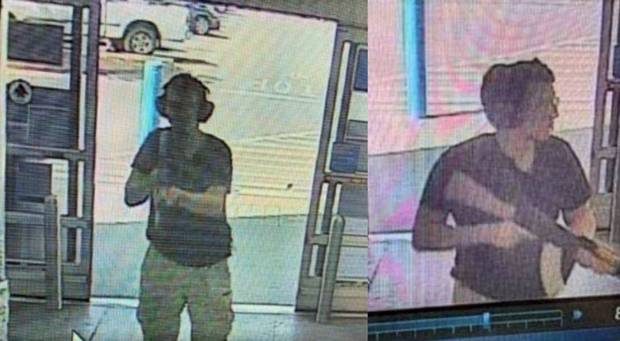 A shooting at a supermarket in the US state of Texas that left 20 dead is being investigated as domestic terrorism, officials say.

A 21-year-old white man was arrested at the scene of the attack in the city of El Paso, near the US-Mexico border.

He is believed to have posted an online document calling the attack a response to “the Hispanic invasion of Texas”.

Police on Sunday said he had been charged with capital murder, meaning he could face the death penalty. US President Donald Trump has said “perhaps more has to be done” to prevent mass shootings following the El Paso attack and another in Ohio 13 hours later in which nine people, including the gunman’s sister, were killed.

“Hate has no place in our country, and we are going to take care of it,” he told reporters on Sunday. “This has been going on for years, for years and years in our country and we have to get it stopped.”

The president went on to link both attacks to a “mental illness problem”.

“If you look at both of these cases, this is mental illness. These are people who are very, very seriously mentally ill,” he said.

The El Paso gunman opened fire on a crowded Walmart on Saturday with an assault-style rifle and surrendered after being confronted by police officers outside the store. Twenty-six people were injured in the shooting.

“We’re treating this as a domestic terrorist case,” John Bash, the US Attorney for the Western District of Texas, told a news conference on Sunday.

He said the attack appeared “to be designed to intimidate a civilian population, to say the least”.

He has been co-operating with investigators, according to police, and has reportedly told them he acted alone.

The shooting, believed to be the eighth deadliest in modern US history, took place in a city where most of the population of 680,000 is of Hispanic descent.

The victims have not yet been named but Mexico’s President Andrés Manuel López Obrador said six Mexican nationals were among the dead and seven others were injured.

Security camera images said to be of the attacker show an armed man in a dark T-shirt wearing eye glasses and what appear to be ear protectors.

Like the attack in Christchurch, the suspected attacker fits a particular profile – an individual who may have acted alone but who inhabited an international online subculture of extremism, one in which others incite and encourage violent acts.

And again, as in Christchurch, just before he acted the individual allegedly posted his intentions on the online forum 8chan. The pressure may grow now to act against such platforms and also for the authorities to take this growing threat more seriously, especially in the US.

Best Place to Connect with Real Women of all ages