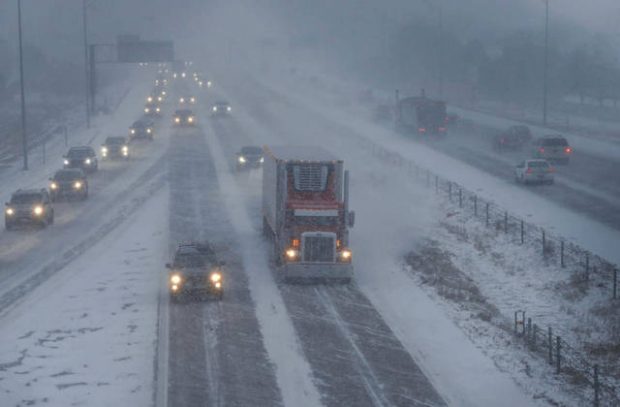 A sprawling storm so massive it simultaneously dumped snow in Minnesota and Virginia and heavy rains from Indiana to Alabama fueled weather havoc Wednesday in every state east of the Mississippi River and beyond.

In the North, snow totals were tamped down by a more dangerous winter storm weapon – ice. Detroit, Chicago, Philadelphia and Washington were among major cities hit with inches of snow, with sleet moving in behind it.

More than 200 million people will feel the storm’s wrath before it finally rolls into history Thursday.

A Kansas woman died when she lost control of her vehicle because of snow and ice.

“The heaviest snow will be over central Pennsylvania,” said AccuWeather senior meteorologist Alan Reppert, who should know. AccuWeather is based in State College, Pennsylvania, where classes were canceled at sprawling Penn State University.

He was right on target, as two Pennsylvania cities – Chambersburg and Upper Strasburg – reported 10 inches as of mid-afternoon, the highest total for the eastern part of the storm.

Almost everyone who got snow could look forward to a chaser of sleet and freezing rain, Reppert told USA TODAY.

“At least snow allows for some traction,” Reppert said. “Ice can be unforgiving.”

The National Weather Service’s forecast for parts of Virginia on Wednesday was several inches of snow followed by ice and sleet. Its warning of dangerous commutes was a recurring theme across much of the nation.

“Travel will be very difficult,” the notice said. “The combined weight of snow, sleet and freezing rain could result in downed branches and isolated power outages.”

In suburban Arlington, the school schedule has been plagued by a string of closures and late openings all winter. High school math teacher Bill Drake was preparing to begin digging out amid heavy snowfall that was forecast to turn to ice.

“I love snow days as much as the kids,” Drake said. “It’s hard to make up for missed time in the classroom, but the extra time with my family is a huge bonus.”