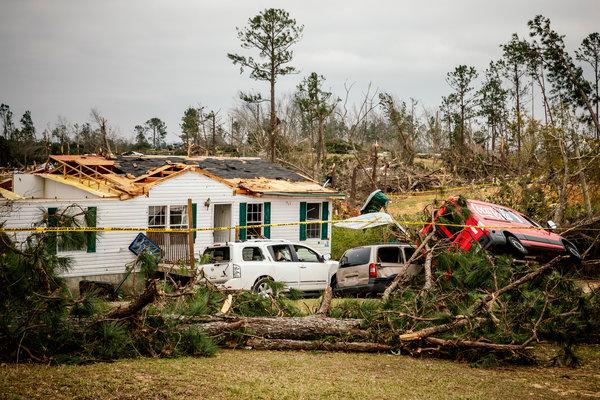 Three children died in Texas and Louisiana Saturday after powerful storms, including reports of tornadoes and flooding, swept through the states, and forecasters warned severe weather could hit other parts of the southern U.S.

In Texas two children, ages 8 and 3, were killed when a tree fell on a car Saturday afternoon, trapping them inside, according to the Angelina County Sheriff’s Department. They were pronounced dead at the scene.

In West Monroe, Louisiana, a 13-year-old boy drowned in a drainage area in what officials believe was a weather-related incident, said Glen Springfield, spokesman for the Ouachita Parish Sheriff’s Office. Several streets had been closed in the city of around 13,000 and a flood warning had been issued for the area, officials said.

The National Weather Service’s Fort Worth office tweeted that after a preliminary damage assessment, the tornado in Robertson County was estimated to have a peak intensity of EF-3 with winds of 140 mph. The damage survey will continue over the next several days, the service said.

Huggins said he got a call from the National Weather Service around 11:20 a.m. about a storm system that was on the ground and headed towards Franklin. “We started trying to get people activated to get eyeballs on it, and by then the thing was moving fast and it went right through town,” he said.

In Roberston County, Texas, the damage in Franklin was called “devastating” by Huggins, the emergency management coordinator. He said that everyone has been accounted for.

“To this small town of Franklin, it’s very devastating, how we’re going to get people help to restore their homes that don’t have insurance or what have you, it’s going to be pretty difficult,” he said. “It’s going to be a little difficult putting it back together, but we’ll do it.”