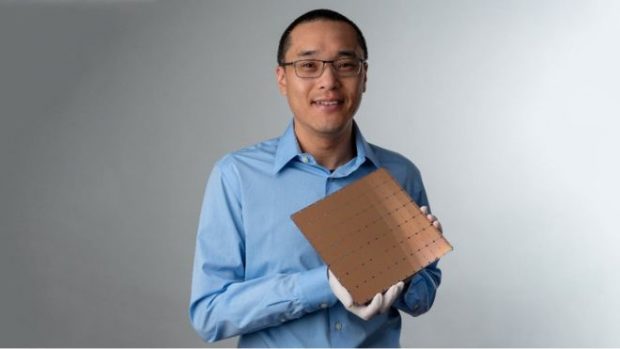 A Californian-based start-up has unveiled what it says is the world’s largest computer chip.

The Wafer Scale Engine, designed by Cerebras Systems, is slightly bigger than a standard iPad.

However, one expert suggested that the innovation would prove impractical to install in many data centres.

Why is the development important?

Computer chips have generally become smaller and faster over the years.

Dozens are typically manufactured on a single silicon “wafer”, which is then cut apart to separate them from each other.

The most powerful desktop CPUs (central processing units) have about 30 processor cores – each able to handle their own set of calculations simultaneously.

GPUs (graphics processing units) tend to have more cores, albeit less powerful ones.

But Cerebras’ new chip has 400,000 cores, all linked to each other by high-bandwidth connections.

What are the disadvantages?

While the chips process information much faster, Dr Ian Cutress, senior editor at the news site AnandTech, said the advances in technology would come at a cost.

“That’s why it’s suited for artificial intelligence development as that’s where the big dollars are going at the moment.”

Is this the first AI-chip?

Cerebras is far from the first company to develop chips to power AI systems.

But not all such efforts have been successful.

In the early 1980s, the US company Trilogy received hundreds of millions of dollars in funding to create its own super-chip.

However, the processors got too hot in testing and were less powerful than initially thought.