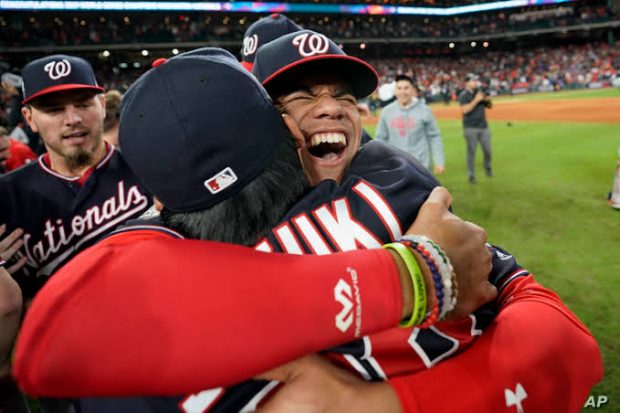 Howie Kendrick, Anthony Rendon and the Washington Nationals completed their amazing comeback journey — fittingly with one last late rally on the road.

In Game 7 of the World Series, no less.

Kendrick and Rendon homered in the seventh inning as the Nationals overcame a two-run deficit, rocking the Houston Astros 6-2 Wednesday night to win the first title in franchise history.

With all eyes on Max Scherzer and his remarkable recovery after a painkilling injection, these Nationals truly embraced their shot in the only Series when the road team won every game.

Even more against the odds: Juan Soto and Washington came from behind to win five elimination games this postseason, an unprecedented feat.

“What a story,” said Ryan Zimmerman, the Nationals’ initial draft pick back in 2005.

World Series MVP Stephen Strasburg, new lefty Patrick Corbin and the Nats brought the first World Series championship to the nation’s capital since ol’ Walter Johnson delivered the crown for the Senators in 1924.

This franchise started out as the Montreal Expos in 1969 when the major leagues expanded beyond the border, putting a team with tricolor caps at jaunty Jarry Park. They moved to D.C. in 2005, ending Washington’s three-decade-plus wait for big league baseball after the Senators left town to become the Texas Rangers.

But the incredible path these wild-card Nationals with the curly W logo took, well, no one could have imagined.

Instead, they stuck with the mantra that sprung up on T-shirts — Stay In The Fight.

“That was out motto,” Scherzer said.

And months later they finished it, indeed.

“Let’s be honest, there’s 28 other teams that would love to have our misery today. We play to get here. We play to have an opportunity to win it all. And I just told our team, it’s hard to put into words and remember all the good that happened because right now we feel as bad as you can possibly feel,” he added.

Washington kept pulling away after taking the lead, with Adam Eaton’s two-run single in the ninth accounting for the final margin.

Washington rallied in the eighth to beat Milwaukee in the wild-card game and took the last two to beat Los Angeles in the NLDS, setting up a sweep of the Cardinals in the NLCS.

Far away, a big crowd poured into Nationals Park for a watch party. That was the stadium where Houston hammered the Nats for three games last weekend, but their luck changed in Texas.

For the Astros, who brought baseball into the Space Age with their far-out Astrodome and AstroTurf, and helped zoom the game into the galaxy of the Analytics Era, it was a startling end.

Houston shares a spring training complex in Florida with the Nationals and reported to camp in February full of high hopes.

The Astros breezed to the AL West title, edged Tampa Bay in a five-game ALDS and topped the Yankees in the ALCS. They played through front-office fiasco, which led to the firing of an executive for a boorish rant at female reporters during a clubhouse celebration.