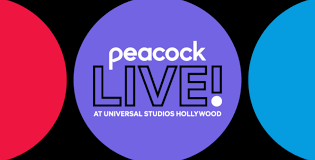 NBCUniversal has announced Peacock Live!, an immersive and interactive two-day fan festival showcasing the best of the company’s past, present and future. Taking place March 28-29, 2020 on the legendary Universal Studios backlot, Peacock Live! will give fans insider access to the latest and greatest film, television, sports, lifestyle and theme park experiences from NBCUniversal. Peacock Live! ticket holders will receive general admission entry to Universal Studios Hollywood, including exclusive after-hours park after dark access throughout the weekend, offering ticketholders the rare opportunity to enjoy the theme park after it closes to the public. Peacock Live! will engage guests in a variety of NBCUniversal platforms with interactive activations, photo opportunities, celebrity panels and more, and feature content from NBC’s hit television shows, Universal Pictures’ upcoming film slate, NBC Sports’ biggest event of the year, the 2020 Tokyo Olympics, and a glimpse at how Universal Parks & Resorts bring special events and thrill rides to life. The event will also feature original props and costumes from extensive archives, and offer an exclusive sneak peek of the company’s new streaming platform, Peacock. Early bird tickets are on sale now at www.PeacockLive.com. Universal Studios Hollywood Pass Members can purchase tickets to Peacock Live! at a specially-priced rate at www.UniversalPassMember.com.

From NBC:
“TODAY” – Stop by and say “hello” to the one-and-only Al Roker; put yourself behind the TODAY news desk and create a #MyTODAYPlaza shout-out that may be featured on an upcoming show.
“American Ninja Warrior” – Choose your adventure on obstacles inspired by NBC’s hit competition show. Kids and adults can compete on a family-friendly race through a seven-obstacle inflatable Ninja Warrior course, or test their ninja skills on full-sized obstacles seen on the show.
“The Voice” – Take a seat – and a spin – in the iconic red coach chair from NBC’s Emmy Award-winning musical competition series for a fun GIF or photo.
“Ellen’s Game of Games” – Play the fan-favorite “Hot Hands” game from Ellen DeGeneres’ hit primetime show.

From NBC Sports:
2020 Tokyo Olympics – In celebration of skateboarding and sport climbing making their Olympic debuts this summer in Tokyo, watch skateboarders give a preview of Olympic-sized tricks, and sport climbers race to the top of the wall – fans can even harness up and give it a go themselves.

From Peacock:
An exclusive preview of NBCUniversal’s upcoming streaming service Peacock, plus panels and meet & greets, fan giveaways and more.

From Universal Pictures:
“Fast & Furious” – Explore the largest vehicle collection ever assembled from the “Fast & Furious” franchise, complete with props and costumes. Plus, see new vehicles from the latest film installment. Dennis McCarthy, Picture Car Coordinator for the franchise, will be on-site to talk about how these vehicles are created.
“Trolls World Tour” – Be one of the first to experience “Trolls World Tour” before it hits theaters, only for Peacock Live! guests at Universal Cinema AMC at CityWalk Hollywood. Meet and greet with Poppy, Branch and Guy Diamond – and transform into a Troll with a once-in-a-Trollstime photo experience.
“Minions: The Rise of Gru” – A special immersive experience tied to “Minions: The Rise of Gru,” the latest installment of Illumination’s Despicable Mefranchise, the highest-grossing animated film series globally. The new film arrives in theaters July 3.

From Universal Parks & Resorts:
Ticketholders will receive entry to Universal Studios Hollywood throughout the weekend, including exclusive park after-hours access and insightful panels, such as:
“Halloween Horror Nights” – Meet the creative team behind the world’s most successful Halloween event, gain insight to the filmmakers with which they collaborate and learn how iconic horror films come to life as interactive, dimensional haunted houses and mazes.
“The Making of a Theme Park Attraction” – How does a global blockbuster film franchise like “Jurassic World” become a mega-hit theme park thrill ride? Guests will have a chance to hear first-hand from the creative minds responsible for bringing favorite films from the silver screen to groundbreaking, next-generation thrill rides.

From Universal Studios Backlot:
Celebrate the legacy of NBCUniversal with props, costumes and sets on the legendary backlot where your favorite films and shows were shot, and where new favorites continue to be made. Step onto the legendary New York Street with sets like Courthouse Square and go behind-the-scenes to become part of the action.
Additional programming, scheduled appearances and more will be announced in the coming weeks.